Slap Shot (Then and Now)

When you say "Johnstown Pa", the average person will probably either say that they know the city because of our floods, or because of the movie Slap Shot. Judging by the title of this blog post, you've probably guessed we're not going to be talking about our floods, we'll save that for anther time.

Today is all about the movie Slap Shot. More importantly, taking a look back at the city of Johnstown which played the role of Charlestown in the movie. Fan's of the film know what the city looked like back in 1977, but many probably don't know what Johnstown looks like now. Maybe you live in Johnstown and would like to know where some of the filming locations were. Well this is the post for you.

We're going to look back at several scenes in the cult classic and show you what they look like today.

1. We will not be covering anything from inside the Cambria County War Memorial Arena. We might do a part two during the season and cover what the arena looked like back then and what it looks like now. You'll have to wait and see.

2. Sorry, no nude scenes. We're not going to do a Then and Now of actress Melinda Dillion who played Suzanne Hanrahan, because this is a blog is for families, and the "Now" would have to be an artist's rendering, and I'm not that good of an artists. We will cover the "Mooning" scene, but won't show any of the film stills from that scene. If you need to see that stuff, we'll give you a moment right now to Google it.


Okay, back to the blog.

3. If there's something we missed that you'd like information on, leave us a comment, we'll do our best to answer it for you.

Johnstown used to be a happening place. It could be again, but we'll save that for a rainy day, which around here, could be any moment.

5. The movie also had scenes filmed in Hamilton, Syracuse, Utica New York, and Pittsburgh Pa. We're only focusing on Johnstown Pa, which goes without saying, but we said it anyways.

Let's get started. By the way all pictures and graphics were done myself, unless stated other wise.

The town of Hyannisport is shown briefly in the film. In case you're not sure when, it's when the Chiefs' bus, and the fan's bus, drives through the town, mooning Hyannisport's fans.

In real life, Ligonier Pa played the role of Hyannisport. Ligonier is roughly 22 miles, southwest, from the city of Johnstown.

The above image shows the location where the scene was shot, in downtown Ligonier. On the top right of the roundabout, you'll see a large building with white pillars in the front. That's the one building that can be clearly seen in the film. You can click on this picture or any other picture you see in this post to enlarge them. (left clicks only)

Continue to Full Article
Written By thetomablog at 12:55 PM 41 comments: 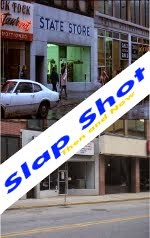